We recently received a call from a homeowner who had been considering a Wayzata bathroom remodeling project for about three years. They were finally in a good position to get this done a year ago, but strongly considered doing a lot of the job themselves. Because they didn’t have any DIY experience, especially in things like replacing plumbing or demolition, they gave us a call. It seems they had done their research, which we could tell when they asked us about a thousand questions during our initial consultation! This was, of course, absolutely no bother to us. We know that part of the job is making sure each client is completely comfortable with the entire process when the contracting process begins.

We Arrive for the Bathroom Remodeling Consultation

We came to their home and were shown a very dated, 90’s era master bathroom. There was a lot of tile, brass on the shower door frame, and a separate bathtub with a small space for a sink and mirror. The homeowner wanted to combine the bathtub and shower, and wanted to see if adding a clawfoot tub would be possible. We took measurements, went over several products (along with matching design options), and settled on a general aesthetic. After the initial consultation we were able to provide a rough estimate of what the job would entail. 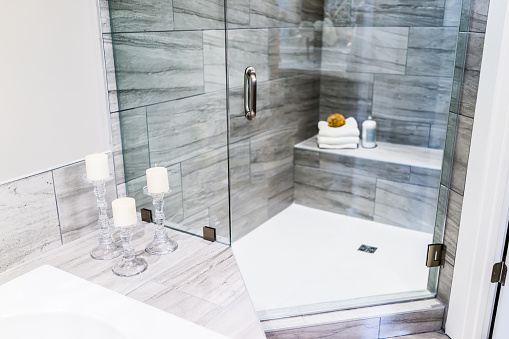 After the initial meeting, the homeowner told us they needed to consult with a couple of other companies. Just a day later, we received the call to start the process. We went back to the home to help the owner make some final decisions, then it was time to set a start date and get to work! The first thing that needed to happen was pulling out all of the stuff that wouldn’t be kept in the new bathroom. Just about everything except for the toilet (which had been replaced just a few years prior) had to go! Removing the shower stall to make room for a slightly larger tub was a really excellent idea. Not only did it make room for a much more enjoyable bathing experience, but it also opened up room around the tub. This gave a greater sense of space in the bathroom, making it appear much larger than it actually was.

Sitting at the toilet before the renovation was definitely quite cramped, but now it was truly a king’s throne. Also, the clearance from the edge of the tub to the sink increased, so more space was created to be able to get ready in the morning, or wind down from a long day at night. The old tile was replaced with some very classy and understated stone, which would also feel a lot less cold. This, along with some new lighting made the whole space much more warm and inviting, and a fantastic place to relax on cold winter nights!

Once we were finished, the owner was very pleased. They told us that we had completed the project in very impressive fashion, and they couldn’t wait to light some candles and unwind in their new huge tub!